“Poets do not go mad; but chess-players do. Mathematicians go mad, and cashiers; but creative artists very seldom. I am not, as will be seen, in any sense attacking logic: I only say that this danger does lie in logic, not in imagination.” 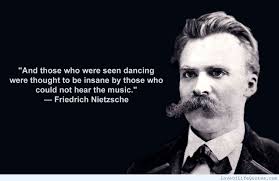 “The poet only asks to get his head into the heavens. It is the logician who seeks to get the heavens into his head. And it is his head that splits.”

Next: Orthodoxy III: The Suicide of Thought