“You come of the Lord Adam and the Lady Eve,” said Aslan. “And that is both honor enough to erect the head of the poorest beggar, and shame enough to bow the shoulders of the greatest emperor on earth. Be content.”

“Aslan” said Lucy “you’re bigger”.
“That is because you are older, little one” answered he.
“Not because you are?”
“I am not. But every year you grow, you will find me bigger.”

One year later, in earthling time, the children are whisked back to Narnia, which is now centuries older, and has fallen on hard times.  Aslan’s sacrifice and the reign of the children as Kings and Queens of Narnia have been reduced to myth, and the talking animals have been driven underground by the Telemarines (a race of men) who rule Narnia like Vladimir Putin <or, name your favorite unfavorite Russian despot>.

The young Telemarine Prince Caspian, however, has a governess who secretly tells him of Aslan, the White Witch, and the four kings and queens.  She is dismissed by Caspian’s usurper uncle-King Miraz, replaced by a disguised dwarf who advises Caspian to flee. Caspian rendezvous s with an army of talking animals, who promptly get routed by an army of Telemarines.  Caspian blows on a magic horn (that had been given to Susan as a gift in LWW) which summons the 4 children into Narnia; fortunately they are just in time to help Caspian avoid the advice to bring back the White Witch as an advisor instead.

Lewis’s construction of this Narnia, far in the future, helps Lewis to model our own Medieval past, which, like tales of the One Ring, have passed into legend and myth.  “Narnia is very much a medieval place, with a love for hierarchy, pageantry, and chivalric codes that, when broken, lead to evil.” Markos notes (Life & Writings of CS Lewis, Guidebook).  The loss of belief thus modeled shows up in a scene in which Aslan appears to Lucy (but not the others) and tells her to bring the other children to see him. Lucy fails in this; Aslan admonishes then forgives her, but then gives her the insight that she will never know what would have happened had she first been obedient. This is a theme that Lewis highlights throughout the series – that our choices have eternal consequences! 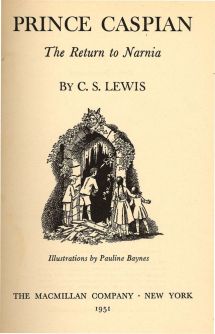 In the final battle, a scene powerful in its Christian implications occurs when Aslan calls back to life the forests and rivers for the final battle between the armies of Caspian and Miraz. This revival of the natural world is accompanied by Bacchus, the Greek god of wine, who helps to destroy Miraz’s evil minions. “On seeing these pagan revelers, Susan says that she would fear them if Aslan weren’t there, perhaps Lewis’s way of suggesting that when viewed through the life, death and resurrection of Christ, the pagan myths are not only tamed but also come true” Markos insightfully comments.

“You come of the Lord Adam and the Lady Eve,” said Aslan. “And that is both honor enough to erect the head of the poorest beggar, and shame enough to bow the shoulders of the greatest emperor on earth. Be content.”

“Aslan” said Lucy “you’re bigger”.
“That is because you are older, little one” answered he.
“Not because you are?”
“I am not. But every year you grow, you will find me bigger.”

“Aslan: You doubt your value. Don’t run from who you are.” 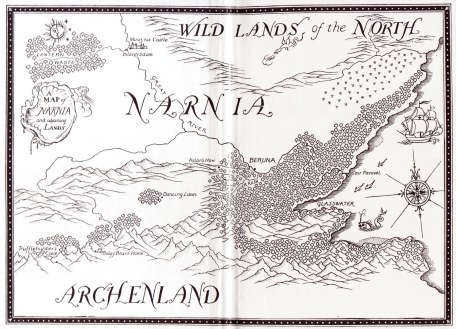 “That’s the worst of girls,” said Edmund to Peter and the Dwarf. “They never can carry a map in their heads.”
“That’s because our heads have something inside them,” said Lucy.”

“Welcome, Prince,’ said Aslan. ‘Do you feel yourself sufficient to take up the Kingship of Narnia?’

Good,’ said Aslan. ‘If you had felt yourself sufficient, it would have been proof that you were not.”

The martial imagery of Prince Caspian, such as the celebratory appearance of Bacchus, Aslan’s terrible power and swiftness once engaged in battle, as well as the description of Peter’s armor, including the special attention to his shield (of faith), which Lewis noted could be used as an offensive weapon, all show how the imagery of Mars served to enrich the story itself (first level of interpretation) as well as the more allegorical or symbolic themes (second level).  Bacchus, the god of wine and festival, shows up to celebrate the victory, fitting with the Martial theme.

He is the worshipp’d male,
The earth’s husband, all-beholding,
Arch-chemic eye. But other country
Dark with discord dins beyond him,
With noise of nakers, neighing of horses,
Hammering of harness. A haughty god
MARS mercenary, makes there his camp
And flies his flag; flaunts laughingly
The graceless beauty, grey-eyed and keen,
Blond insolence – of his blithe visage
Which is hard and happy. He hews the act,
The indifferent deed with dint of his mallet
And his chisel of choice; achievement comes not
Unhelped by him – hired gladiator
Of evil and good. All’s one to Mars,
The wrong righted, rescued meekness,
Or trouble in trenches, with trees splintered
And birds banished, banks fill’d with gold
And the liar made lord. Like handiwork
He offers to all – earns his wages
And whistles the while. White-feathered dread
Mars has mastered. His metal’s iron
That was hammered through hands into holy cross,
Cruel carpentry. He is cold and strong,
Necessity’s song.