“Who are you?” asked Shasta.

“Myself,” said the Voice, very deep and low so that the earth shook: and again “Myself,” loud and clear and gay: and then the third time “Myself,” whispered so softly you could hardly hear it, and yet it seemed to come from all around you as if the leaves rustled with it.

“The oddest of the chronicles, a tale of high adventure reminiscent of the Arabian Nights, the Odyssey, and the romances of Shakespeare” (Markos) occurs during the reign of High King Peter, King Edmund, and Queens Susan and Lucy, though the focus is on the two Narnian characters, Shasta and his talking horse, Bree.  Shasta, the son of a Narnian Prince, is separated at birth from his brother by an evil advisor and left drifting in a boat, from which he is rescued and raised by fishermen.  Shasta grows up in Calormen, a country directly south of Narnia, that Lewis patterned on the Muslim Empire of the Middle Ages. The “heathen” Calormenes think Aslan a false deity, and plan to invade and conquer Narnia. According to a prophecy, however, Shasta escapes from Calormen, and with his talking horse Bree, saves Narnia from the invasion.  Shasta is considered an archetypal figure, along with the Princess Aravis (and her horse, Hwin), who flees Calormen to avoid an arranged marriage, then joins up with Shasta and Bree.

Lewis uses the story arcs of various characters to illustrate the journey we all take. Shasta and Aravis are royal pilgrims disguised as beggars (similar to Dickens’ Oliver Twist) in search of their freedom.  Once Narnia is saved, the vain Calormen general Rabadash is offered the chance to repent, but arrogantly rejects the Narnians’ mercies; after several appeals, Aslan turns him into a donkey.

The most powerfully meaningful scene occurs when Shasta is lost and comes face to face with Aslan.  Shasta first feels Aslan’s numinous though invisible presence, and is terrified to meet him. When asked, like Paul the Apostle asked of the risen Christ “who are you?” (Acts 9:5), Aslan responds, three times, with “Myself,” with cadences suggesting the separate members of the Trinity: “very deep and low, so as to shake the earth” (God the Father), “loud and clear and gay” (Christ the Jovial, logocentric King) and “whispered so softly you could hardly hear it, and yet it seemed to come from all round you as if the leaves were rustling with it” (the Holy Spirit).

Shasta feels both terror and beauty in the presence of Aslan. “Perhaps to allay his sense of awe” (as Markos notes), Shasta asks Aslan to explain Aslan’s actions towards Aravis, but Aslan refuses: he will tell Shasta only his own story (similar to how Jesus responded to Peter’s questions about John in John 21:22: “If I want him to remain alive until I return, what is that to you? You must follow me”). 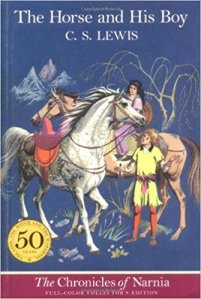 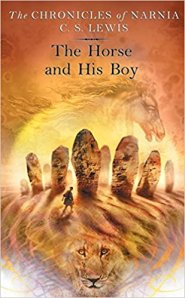 “Child,’ said the Lion, ‘I am telling you your story, not hers. No one is told any story but their own.”

“Aravis also had many quarrels (and, I’m afraid even fights) with Cor, but they always made it up again: so that years later, when they were grown up they were so used to quarreling and making it up again that they got married so as to go on doing it more conveniently.”

“Onward and Upward! To Narnia and the North!”

Aslan: “Dearest Daughter. I knew you would not be long in coming to me. Joy shall be yours.”

“Please,’ she said, ‘You’re so beautiful. You may eat me if you like. I’d rather be eaten by you than fed by anyone else.”

“One of the drawbacks about adventures is that when you come to the most beautiful places you are often too anxious and hurried to appreciate them.”

“Who are you?” asked Shasta.

“Myself,” said the Voice, very deep and low so that the earth shook: and again “Myself,” loud and clear and gay: and then the third time “Myself,” whispered so softly you could hardly hear it, and yet it seemed to come from all around you as if the leaves rustled with it.

Planet: Mercury helps speed along the story and symbolic theme and messages of The Horse and His Boy, as its relative speed of rotation about the sun compared to the rest of the planets endowed its imagery with the imagery of being youthful, lively and energetic. The metallic element, Hg or mercury, also known as quicksilver, exhibits elusive, shimmering movement, hence the adjective ‘mercurial.’ As the planet is deemed quick, and due to its proximity to the sun, Mercury has gained the connotation of being the messenger of the sun or gods, as well as thusly conducting business on its many travels.  Like separated drops of mercury, various pairs are reunited in The Horse and His Boy, including the twin brothers Cor and Corin who are separated at birth, and as well as riders with their  horses twin horses Shasta and Bree as well as Aravin and Hwin.  The brothers Cor and Corin in fact represent the twins Castor and Pollux of Homer’s Iliad,  Cor or Shasta is based on Castor, who breaks horses in Homer, while his twin Corin is based on Pollux, the Homeric boxer (and in Homer, these brothers died and were turned into the constellation Gemini (‘the twins’), ruled by Mercury).

As the messenger of the gods, Mercury was thus associated with speech, or loquacity and language. Aside from the talking horses Bree and Hwin, the (basically) evil Calormenes are slow and witless in their speech. Aslan, on the other hand, upon meeting Shasta in the mountains, is so fleet of foot as to suggest to Shasta that he had encountered many lions, though in fact is was just Aslan, who performed many roles, as does the figure of Christ King, redeemer, sanctifier and the list goes on).  The mercurial imagery is also used when Aslan answers to Shasta about His identity, answering ‘Myself’ three times, with cadences suggesting the separate members of the Trinity: very deep and low, so as to shake the earth (God the Father), ‘loud and clear and gay’ (Christ the Jovial, logocentric King) and ‘whispered so softly you could hardly hear it, and yet it seemed to come from all round you as if the leaves were rustling with it” (the Holy Spirit). Curiously, the Greek god Hermes Trismegistus (three times great Hermes) – god of Mercury and inspiration for hermeneutics, the study of interpretation (of language) ) – was thought by medieval Christians to have been an ironic glimpse of the Trinity given to the Greeks.  Perhaps just as significant a message from the consideration of language in the mercurial Horse and His Boy is given in when Shasta first encounters Aslan, and is dumbfounded, realizing that he couldn’t, wouldn’t and needn’t say anything in Aslan’s presence, however similar to the lyrical utterances of Eliza Doolittle’s father Alfred Doolittle in My Fair Lady.

Next beyond her
MERCURY marches;–madcap rover,
Patron of pilf’rers. Pert quicksilver
His gaze begets, goblin mineral,
Merry multitude of meeting selves,
Same but sundered. From the soul’s darkness,
With wreathed wand, words he marshals,
Guides and gathers them–gay bellwether
Of flocking fancies. His flint has struck
The spark of speech from spirit’s tinder,
Lord of language! He leads forever
The spangle and splendour, sport that mingles
Sound with senses, in subtle pattern,
Words in wedlock, and wedding also
Of thing with thought